Alamo Field was the former name of what is now San Antonio International Airport. 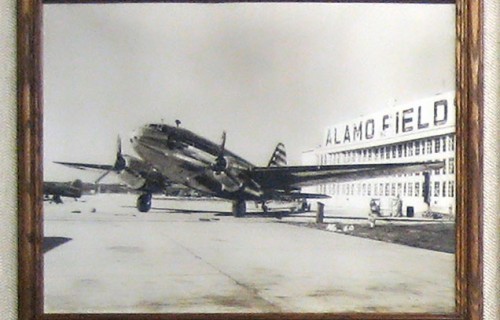 I found the above framed photo of “Alamo Field” in the Dee Howard Foundation archives. I had not heard of Alamo Field and had no idea why Dee would have had this framed photo in his collection so I did some research. Alamo Field was the former name of what is now San Antonio International Airport.

According to Wikipedia “…San Antonio International Airport was founded in 1941 when the City of San Antonio purchased 1,200 acres (490 ha) of undeveloped land that, at the time, were north of the city limits ….for a project to be called "San Antonio Municipal Airport."

"World War II Wartime needs meant the unfinished airport was pressed into federal government service. The airport opened in July 1942 as Alamo Field and was used by the United States Army Air Forces as a training base…."

"At the end of the war the airfield was no longer needed by the military and was turned over to the City of San Antonio for civil use…” and was known as San Antonio Municipal Airport, later to be renamed San Antonio International Airport.