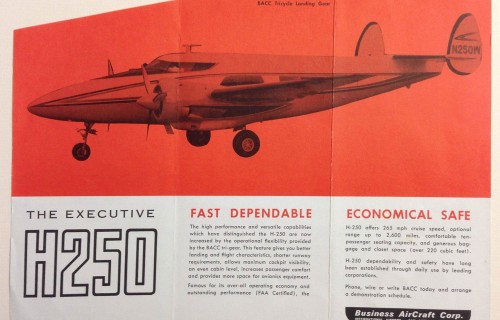 We all know the story, Dee formed Howard Aero, Inc. in 1947 and by 1960, when Dee was forty years old, he had almost 1000 employees and an enviable track record of innovation and success with his Howard Aero aircraft.

So why in 1964 did Dee leave the company he founded and built to its international stature to start The Dee Howard Co.?

Up until now, the story has been that Dee wanted to focus on jet aircraft. That is partially true, Dee was always on the cutting edge of technology. But did Dee’s interest in broadening his horizons to include jet aircraft require him to leave Howard Aero, Inc.? Why couldn’t he just expand the product line of Howard Aero, Inc. instead of starting a new company? There must be more to the story… and there is.

The back story as to what really happened provides great insight to Dee, his grit, determination, entrepreneurial and engineering genius.

Dee agreed, they had a hand shake deal and went to work.

Things were going great in Dee’s relationship with his Mexican friend on their project but Dee told his friend that Dee was concerned that his friend’s pilot was unsafe and expressed concerns for the safety of his friend and other passengers. Dee’s friend thanked him for his concern but ignored the warning, one day, Dee’s worst fears were realized when Dee’s friend and Joint Venture partner were killed in an aircraft accident in which the pilot was the person that Dee warned his friend about. Now Dee had a problem.

Not only had Dee lost his good friend in a tragic accident but all of the costs of the work in process were on the books of Howard Aero, Dee could not get bank financing to cover the debt, and when Dee spoke with his friend’s family about continuing to provide financing and continuing on with the Joint Venture, they said there was nothing in writing, they knew nothing about the deal, and refused to provide any more funding.

The death of Dee’s friend and financial partner was about to take down Howard Aero, Dee had to scramble to find someone else to provide financing for the aircraft production, and pay his suppliers or the game was over. So in typical Dee fashion, he scrambled and did find another potential financial partner but with one big difference. The new prospective financial partner insisted on having a controlling interest in Howard Aero if he was going to provide financing whereas before with the Mexican industrialist he only split the profits on specific aircraft models that were produced and did not have an ownership interest in the company.

Dee had a choice to make, take the deal he was being offered and give up voting control of Howard Aero or do not take the only viable deal he had at the time and Howard Aero would collapse.

Dee took the deal to save the company.

Can you imagine the impact this had on Dee? Fired from the company he founded in 1947 that had grown to almost 1000 employees by 1960, the largest manufacturing employer in San Antonio at the time, a company with a world class reputation for cutting edge innovation in aviation and here he was out on the street left to his own devices to start over with $2,500 in his pocket and a wife and two kids to support. Absolutely shocking.

But in typical Dee fashion, when he was told the news, his response was “…you are making a hell of a mistake.. “ as the new majority owner would soon learn.

So Dee left Howard Aero, not of his own choosing, and took all of his engineering and entrepreneurial brilliance and stellar reputation for innovative products with him and started The Dee Howard Co. and the rest is history. The majority shareholder of Howard Aero changed the name from Howard Aero, Inc. to Business Aircraft Corp also referred to as BACC (see the photo at the beginning of this article).

Within a few years BACC went out of business. For many years after that, the word on the street was that Dee Howard went bankrupt, Dee was very sensitive to that because neither Dee nor any company that he owned ever went bankrupt and no creditor or customer of Dee or his companies every lost a dime on Dee Howard.