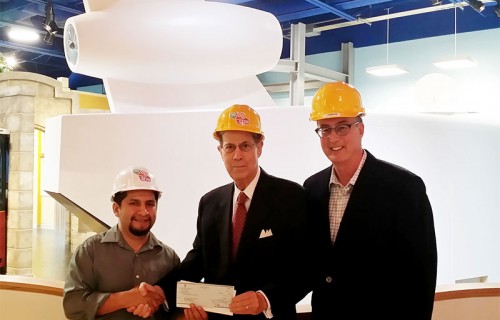 This grant is part of DHF’s ongoing collaboration with the DoSeum which began with DHF’s support of the museum’s Come Fly with Us program in November 2014.

The San Antonio Children’s Museum was founded by a group of dedicated volunteers who were committed to building a community space dedicated to early childhood development.

In September of 1995, the museum opened its doors in downtown San Antonio. Since then, millions of visitors explored three floors of hands-on exhibits that spark children’s imagination and help them discover a world of knowledge. Dedicated to children ages 0-10 years, the museum’s exhibits and programs have always focused on early childhood learning, especially in the creative arts, sciences and early literacy.

San Antonio’s new museum for kids, The DoSeum, will open on June 6, 2015 at 2800 Broadway near the corner of Broadway and E. Mulberry.

To learn more about The DoSeum please visit their website at http://www.thedoseum.org/